The End of 20 Years Preparation & Construction, the Beginning of a Brand-New Journey

Mr. Tom Williams, Chairman and CEO of Universal Parks & Resorts, Mr. Song Yu, Party Secretary and Chairman of Beijing Tourism Group, and Mr. Tom Mehrmann, President and General Manager of Beijing International Resort Co., Ltd. Theme Park and Resort Management Branch, along with other invited guests attended the grand opening ceremony. Representatives of the constructors and partners of the Universal Beijing Resort project and Team Members of the resort witnessed this important historic moment. Afterwards, the first group of guests visited Universal Beijing Resort to enjoy extraordinary blockbuster fun and celebrate the momentous opening day. The official opening of the resort marks the establishment of a new cultural tourism landmark in Beijing, and caps off the culmination of 20 years of preparation and construction, turning the page on the beginning of a brand-new journey. Representing a major investor in Universal Beijing Resort, Mr. Song Yu, Party Secretary and Chairman of Beijing Tourism Group said, “In the process of cultural integration of world cultures, the establishment and opening of Universal Beijing Resort has brought a different charm to Beijing, a thousand-year-old capital, and has also brought the advantages of the Beijing sub-center with more vitality. I believe that Universal Beijing Resort is set to have a bright and promising future and champion the expansion of the tourism industry in the capital city as a beacon of entertainment and service.”

The widely anticipated opening ceremony integrated classic big screen inspiration and demonstrated the extraordinary charm of the blockbuster movie world offered by Universal Beijing Resort. The grand opening ceremony was held in the Universal Majestic Theatre of the Hollywood land within the park and kicked off with a gorgeous opening music comprised of a medley of film scores. The magnificent introduction was followed up with the phenomenal “In a Universal Soundstage” performance, bringing the audience right into the heart of movie production. Next, two titans of the big screen, Steven Spielberg and Zhang Yimou, welcomed in the opening of Universal’s newest park with a video greeting, wishing Universal Beijing Resort success and guests a good time. The Universal theme song, “This is Universal,” was then performed by Tan Weiwei, evoking the remarkable Universal experience about to unfold in the blockbuster world beyond the gates. Enthusiasm for the ceremony peaked when Mr. Tom Williams, Chairman and CEO of Universal Parks & Resorts, Mr. Song Yu, Party Secretary and Chairman of Beijing Tourism Group and other distinguished guests together snapped down the clapperboard signifying the official opening of the highly anticipated Universal Beijing Resort for guests, ushering in a new cultural and tourism landmark in Beijing created by teams working together in China and throughout the world. 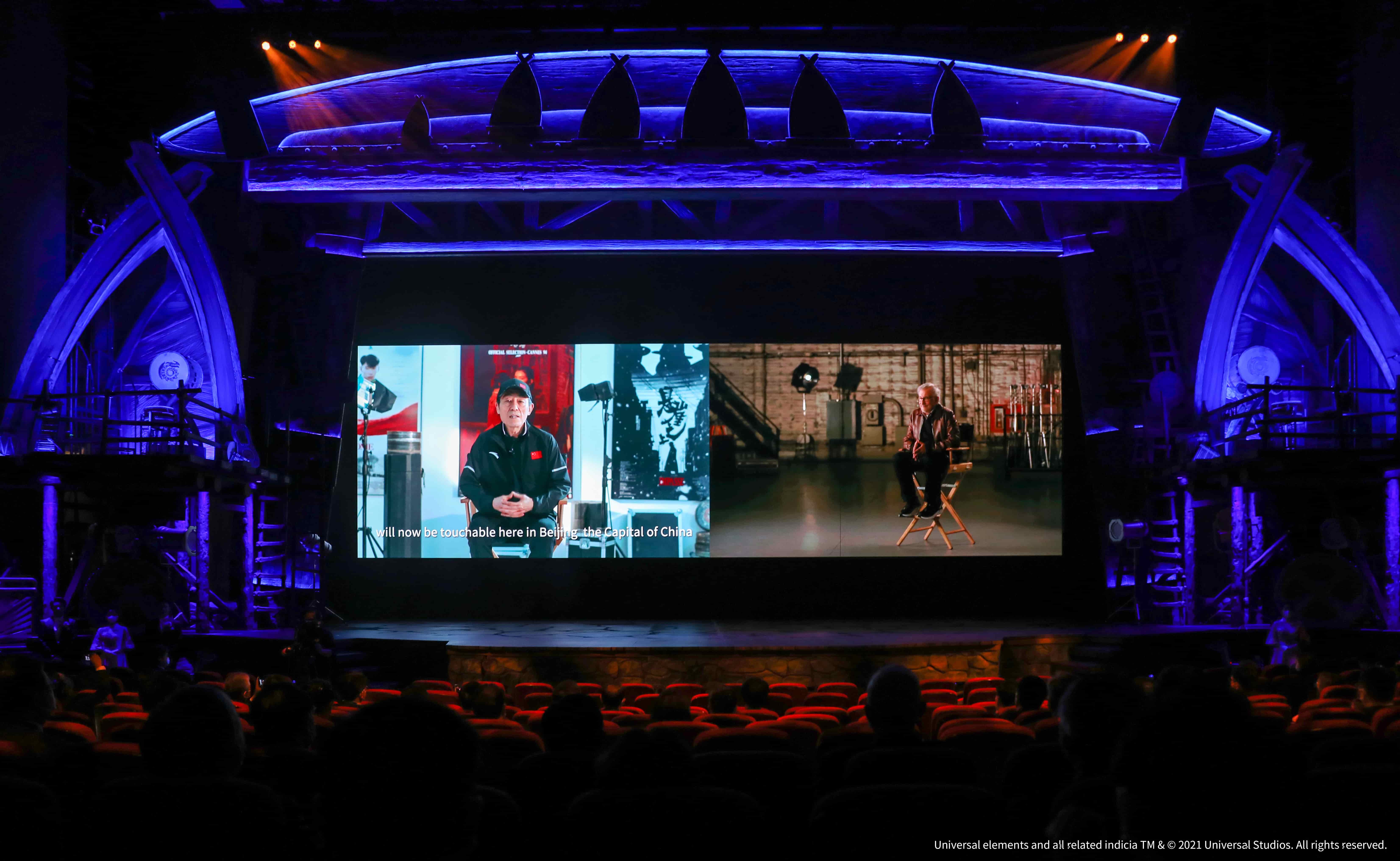 Showcasing a unique experience of “Where Movies Come to Life” with an amazing connection between classic film scenes and reality, 4 film actors including Li Bingbing, who appeared in “Transformers: Age of Extinction,” Liu Haoran, who voiced Hiccup in the Chinese release of “How to Train Your Dragon: The Hidden World”, as well as William Chan and Guan Xiaotong, also visited Universal Beijing Resort as invited special guests, to interact with characters to recreate classic movie scenes.

After 20 years of preparation and construction, Universal Beijing Resort is set to bring movies to life on September 20th, 2021. “20” is not just any number, but a symbol of and tribute to the efforts of the constructors and Team Members over the past 20 years, and reflects our pride and excitement for the grand opening. From now on, the movie world is finally within reach, perfectly blending Chinese and Western cultures and seamlessly combining creativity and imagination. Universal Beijing Resort is finally opening its doors to the Chinese and international guests, immersing them in a blockbuster world beyond imagination where fun and festivity transcend expectations.